It was no coincidence that I launched the third book of the Time Machine Girls series during Black History Month. I thought it was the best time to honor the people of the Underground Railroad. (As you may know, the girls in the story go back in time to meet Harriet Tubman, Thomas Garrett, and a group of escaping slaves.) 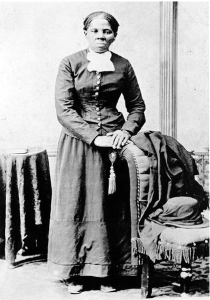 I didn’t know very much about the Underground Railroad when I started writing this book, and I was amazed by the stories I came across during my research. But, I’ll admit it, I loved Harriet Tubman’s story the best. There’s good reason you’ve heard about that woman. She had one of the most courageous and selfless lives I’ve ever read about. If you don’t know why, read on.

Harriet had a horrible childhood growing up as a slave. I won’t go into the details, but she was mistreated and harmed. Fortunately, she escaped all of that as a young woman. She successfully made it to Pennsylvania and began a new free life.

She didn’t need to go back to Maryland to help others. She was already free. But she risked her life and her freedom to go there (a free black person would lose their freedom if they got caught helping slaves escape). It also cost money. While some stations along the Underground Railroad were able to give escaping slaves things like food, money, and shoes (Thomas Garrett was one of those station masters), many couldn’t afford to feed and house people without being compensated. So Harriet would work enough to save her hard-earned money so she could make the trip to the South and free more people. Even after the Fugitive Slave Law of 1850 went into effect (and escaping slaves were no longer legally protected in the free states), she helped people escape all the way into Canada (which was the reason I set my story in 1849, so I could avoid that 1850 law).

So just to recap, she risked her life and her freedom — and spent the extra money she made — to help others.

But it didn’t end there.

During the Civil War, she helped the Union Army as a nurse, scout, cook, spy, and a liaison to slaves who were being freed. And after the war, she worked with Susan B. Anthony on women’s rights. She was one of those people you read about and think, “Wow! Did that person really exist?”

Yep, she was that inspirational. But that doesn’t mean she was ever rich during her life. In fact, for 30 years after the Civil War, Harriet’s friends wrote letters of support, trying to get her a small pension for her efforts in the war and in helping to end slavery.

In 1899, when Harriet was in her late 70s, the government finally gave her a pension of $20 a month for her role as a nurse in the Civil War (the equivalent of about $550 in today’s money).

Anyway, all the people along the Underground Railroad were amazing, and mostly because they risked so much to help others and didn’t expect very much in return. It was a pretty humbling experience to research and write about because it made me realize I don’t do nearly enough of that. I hope you enjoy the book.

2015 was the year I started as a children’s book author, and it’s been amazing. I’m a shy person so putting myself […]

My book has been out for a couple weeks now, and I’m really surprised by how many people have actually bought/borrowed it. […]

#NoShame Here’s the whole story: When I picked my 7-year-old up from school this past Tuesday, I was shocked when she told me […]